{Why I HATE Olivia Pope} I Don't Really Hate Her, But… 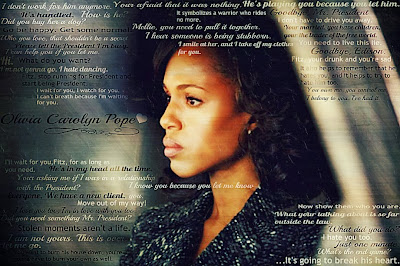 With a title such as that, I guess you are wondering if I am giving up my gladiator sandals at time when I should be strapping them up -  After all it's such a crucial time! With a little more than 2 days left to the premiere of Season 3 of Scandal, I should be waiting with baited breath and crippling anticipation. I have even noticed that many of the daytime morning shows have caught the Scandal fever and are fanning the Gladiator flames of the already enamored viewers as well as trying to garner more salivating scandalized eyes. It's interesting to watch them side step the issues that plague me while giving the viewers the sexy tidbits about what may or may not happen this season.

I do love the show, but the reasons I hate Scandal are multilayered and have had a chance to simmer up to the surface with the summer hiatus.

One reason I hate Olivia is because her character seems so weak willed. It's in direct and painful contradiction to the person that I love to watch solve other's issues with a quick and analytical mind! How could she fall so far into the fairytale of this man leaving his wife (or not) so as to give herself away lock, stock and barrel? It makes me sad because I have been her. I have fallen for someone who was otherwise attached (no gory details here), just suffice to say it ended badly and I knew it would. My question is, if I knew it and although I am extremely intelligent and a great reader of people's motives and intentions, Olivia's character is so much better than that at me, so why is she in the same position?

Another reason I hate Olivia is that she's a martyr. A victim of her own proclivity for this one man that she can't have. She's pitiful over him. I hate feeling pity for a woman who so obviously has so much going for her. The fact that she would continue to CHOOSE HIM over good sense and moral fortitude is something that really gets under my skin! I mean seriously. I scream at the TV sometimes, "C'mon Olivia! Don't do it..." Then, I watch in horror and a kind of fascination at her make the same mistake over and over again, then wallow in the aftermath of her bad judgement, with a glass of good wine and an even better cry or bracing swim.

The last reason I have this love/hate thing going on with Olivia Pope's character is that she has had three sexual relationships going in the past two seasons and they seem to have run concurrent to the one with Fitz. I don't see in any way shape or form where she has any virtue in the show and that calls into question for me why? I mean seriously, why? Why can't we (Black women) have one woman on TV who we can love and adore, who isn't subjected to sexual looseness in her story line? Then the fact that two of her partners are white and have no REAL plans to marry her AT ALL (bringing to mind and heart long buried slavery issues) and the one Black beau who wanted to marry her, she rebuffed so harshly, I felt his pain viscerally. I mean the name of the show is Scandal, but initially I thought it was referring to the fact that she was the scandal handler, not the actual scandal herself.

So in closing... I hate love Scandal. I have recounted all the reason I am conflicted, but at the same time, Olivia's character lowering herself to this kind of behavior is relatable. It makes her human. It makes her emotional. It makes her way less perfect than she would be if she didn't have this Achilles heel plaguing her. It makes her a woman with everything except that ONE THING that she feels she needs or wants and THAT is why I keep watching. A small part of me wants her to get Fitz and move into the White House, in spite of how far-fetched and obscene that would be in reality.

I read and respond to all messages!