on January 05, 2013
Okay, so church on NYE was spectacular, I mean praising and shouting and dancing and crying and praising... Wait did I already say praising? ;) but I didn't expect anything less. 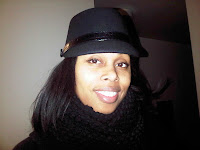 The thing is, I didn't expect for the Manifestation message to be applicable to my life so soon. If you don't know, let me tell you now, I am a Christian. I love God and the Lord Jesus Christ is my Savior. That being said, there was no other place I would have rather been than in the House of the Lord on NYE, with being too sick for several days to even leave my home - I dressed myself up real nicely, made sure my hair was popping, and took my red runny nosed, coughing and sneezing (not as much as I had been - don't want to make the saints sick now...) four Rxs taking, behind to church ANYWAY. LOL!

The message was one that drew from the story of Abraham and Sarah being visited by God himself and two of His angels. (Genesis 18) Of course God didn't need the entourage, He was just showing us how we roll when we are covered by Him - an angel on each side to protect and guard us. Anywho, after waiting and praying and trusting God for 13 years, and then trying to have the son that God promised them with Hagar (they were doing too much and jumped the gun in their frustration), then Sarah really didn't believe it because it seemed impossible... I mean they were in their 90s! Their stuff wasn't working like it used to! Heehee... BUT Finally, their processing was done and God was bringing to fruition the promises that he had made to them ANYWAY - What seems impossible for US to do for GOD is NOTHING!!! They were to have a son within a year's time - the same son he promised them 13 years prior to that moment.

Well, this struck me because there have been several things that I have been praying for and waiting for and trusting God for, for several years and they hadn't come to pass as of yet! I have been given some revelations but no fruit. My son's education, my daughter's outlook, my finances, job and love life.

Manifestation of God's promise was finally theirs and now it will be mine in 2013 - I'm claiming it!

Even though things weren't looking the way I wanted them to exactly and I didn't have all the things I'd asked for years before yet, I had been rather sleepless and filled with restless positive anticipation. Even though I was ill (the enemy...smh he needs to get his life somewhere else!) I found myself up journaling and planning and thinking and praying and worshipping and reading my bible and other devotional texts filling myself with remembrance of Whose I was, and who I was to Him.

It got so bad that I missed church on the last Sunday of the year, I was so sick I felt faint.

But I carried my self to church for NYE ANYWAY.

My son's application to private school was endorsed by a company that had supposedly rejected him - they paid for his processing fees without a dime from me and now he has several testing and interview sessions coming up for a couple of independent schools...

My daughter is getting her confidence up about her college applications and making it happen on so many levels. Our relationship is looking the way I hoped it would (more or less - she is a teenager and I am a strict mom...lol)

ME - Well, momma, momma's got a whole new bag - I have gotten 2 job offers in the past 3 days. Settled two court cases OUT OF COURT mind you when they were JUST ITCHING to get a chick on the stand after 2+ years of going back and forth on one of them....

And my love life is POPPPPPINNNNNNGGGG! In the BEST way! LOLOL! Communication is off the hook, compatibility is off the charts...SMH - Amazing! POW!

Needless to say, ain't much else going on but ALL THE BLESSINGS MY LIFE CAN STAND! HA! You know you are on the right track when they are tracking you down! I am sitting still, but they are finding my address!!!

Can you say it with me?

I know the latter is a bit a mouthful, but shoooooot - I will give credit where credit is due!

GOD IS GREAT and HIS HAND is ON MY LIFE! POW!

I read and respond to all messages!